Although Sufism has always been associated the spiritual dimension of Islam, the term “Sufism” does not seem to have been used until many years after Islam was founded. What, then, is the history of Sufism, and where did it originate?

In all times and places there have been individuals whose deep yearning and inner restlessness have drawn them to spend time in meditation, prayer or retreat. Such a person was the Prophet Muhammad (saws), who even before receiving prophetic revelations would periodically withdraw to a cave outside Mecca to worship God.

Later, as the early community of Muslims emerged, some among Muhammad’s companions were also inclined towards the deepest possible expression and fulfillment of their love of God. The Qur’an states, Verily your Lord knows that you [Muhammad] keep vigil nearly two-thirds of the night, and sometimes half of it or a third of it, you and a group of those that are with you. [Qur’an, LXXIII, 20]

The guidance that forms the basis of the Sufis’ practices is found in the Qur’an and in the teachings of the Prophet of Islam (saws). For example, the practice of silently remembering the Divine (dhikr khafi) was first taught by the Prophet (saws) to his companion Abu Bakr (r.a.) (d.634 C.E.) as the two sought refuge in a cave during the hijrah, or journey from Mecca to Medina.

The Sufi practice of invoking God aloud (dhikr jali) may be traced to guidance given by the Prophet (saws) to his son-in-law and the first person to embrace Islam, Ali (d 661 C.E.).

The miraj, or night journey, of the Prophet (saws) has long inspired mystics as a metaphor for the spiritual path. The Prophet (saws) was physically transported by God from Mecca to Jerusalem, and from Jerusalem was carried up through the seven heavens, finally coming to within “two bows’ length” of God. So, too, the Sufi aspirant strives to transcend the physical limitations of space and time and to draw near to the Divine.

These and other examples show that there was already a strong mystical element in the life of the Prophet Muhammad (saws).

The emergence of the first individuals to be labeled “Sufis” is commonly linked to the historical developments of the seventh and eighth centuries. Between 622 and 632 C.E., the Prophet Muhammad (saws) established in Medina a society that reflected Islamic principles of equity, justice, consensus, piety and sensitive leadership. After his lifetime, the first four successors to his authority, the Caliphs, followed his guidance closely. They governed the Muslims’ rapidly expanding territories in accordance with the teachings of the Qur’an and the sunnah (the behavioural examples and spoken words of the Prophet, saws).

Within a hundred years of the hijrah, there was considerable political turmoil, and leadership of the Muslim community passed out of the hands of its most religiously devout members. Various sub-groups observed that their rulers had become immersed in worldly affairs and selfish ends. Many well-known and respected Muslims, as a result, cut themselves from the government altogether. Within two hundred after the death of the Prophet (saw), some of those who rejected the secular government started to be called Sufis. The Persian shaykh Abu Hashim Kufi (ra) (d. about 776 C.E) was the first person to be known by this name. Between 660 and 850 C.E., the earliest Sufi circles emerged.

The second phase in the spread of Sufi teachings coincides with another important aspect of Islamic history, from 850 C.E. until the tenth century. Greek philosophy and sciences had become current among Muslims, and Islamic society was faced with a storm of rationalism. The common people found their beliefs shaken to the core. Doubts assailed them. To counteract these influences Sufi masters stressed the doctrine of ‘ishq (passionate love) and the experiences attained through spiritual states of the heart.

The third stage of the development of Sufism took place in the tenth century C.E. The sages of this era tried to reawaken a religious spirit that would permeate people’s day-to-day lives. They realized that human behaviour could not improve as long as human hearts were consumed with secular concerns. They emphasized purification of the self, guiding people to overcome the conditioning that comes with worldly pursuits and rational thinking. They helped people revivify their inner lives by providing a framework and discipline for ethical and moral outer lives.

Between the tenth and twelfth centuries, Sufism became a widely respected discipline. Many great scholars and spiritual masters taught during this period, establishing the Sufi practices and terminology. Server tariqahs (orders) were founded.

By the end of the thirteenth century, Sufism had become a well-defined science of spiritual awakening. Through experimentation and investigation, Shaykhs had developed transferable techniques for self-refinement, the efficacy of which was confirmed by numerous aspirants. The Sufi tariqahs had become the basis for a widespread mystical movement, lending new life to humanity’s age-old spiritual quest.

To address the direction in which humanity is headed, we need to consider how we got to where we are. Historically, every nation had some concept of a higher power or powers to whom individuals could turn for help amidst…

Orientalists have expressed various opinions concerning the origins of Sufism. Some authors argue that it was influenced by Greek philosophy. To support this hypothesis Professor R.A. Nicholson of Cambridge cited similarities between the works of Sufis and Greek philosophers. Other… 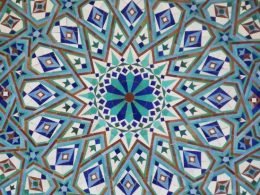 The urge toward mysticism is inherent within every person, irrespective of his or her religion. This is the urge to experience a dimension beyond the material world, to know and return to a spiritual Essence. Some are endowed with it…